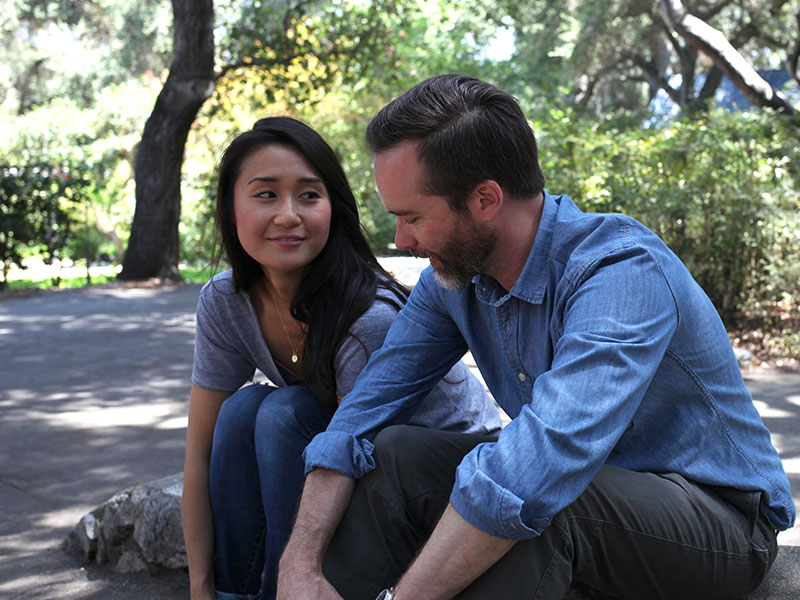 Starting a conversation is something we all have to do every day—but it can still be intimidating. And when it’s someone you don’t know all that well, it can even be terrifying. In a world where first impressions count for a lot, you don’t want to screw it up with one poorly thought-out introduction.

But here’s the good news—in a dating situation, it’s very common for the other person to be just as nervous as you are. Relationships only start getting easier when you feel like you’re with someone you truly know. Unfortunately, you can’t reach that level without a little communication.

If you’re interested in a girl, whether as a friend or as someone you’d like to date, and are looking to strike up a conversation, here are a few tricks to make it easy.

Use observational humor.
Pretend you’re both in the same class. In that class, the teacher does something a little embarrassing. Try to catch her eye, and see if she also thinks it’s funny. Sure, it’s a shame if the teacher was mortified, but on the plus side, it’s a great chance for you to talk about common ground. You can use this same idea at a party, a bar, on the train, or anywhere where something out of the ordinary happens. Just make sure not to be too mean about it—you don’t want to come across as someone who’s overly negative or who laughs at the misfortune of others. From there, the conversation will take you to other places.

Don’t comment on her looks.
You might think you’re being complimentary, but she’s going to view that comment in an entirely different way. Saying something like, “I love your eyes,” when you first approach a girl makes it seem as if you’re only interested in her looks. And let’s be honest, it sounds like a lie. Even if she really does have wonderful eyes, she’s heard that comment 15+ times before. By saving that kind of compliment for later, you’ll show her that you think she’s more than just her appearance. Pay attention to what she’s carrying, or what she’s doing. Does her messenger bag or backpack have a patch of a band you like on it? Did she make an interesting observation or a joke in a conversation? That’s where you should start.

Read her cues.
Reading body language is such an important skill to have. Does she seem tense about something? Does she seem closed off? Then, even if you have the best conversation starter, you’ll want to hold off a bit. Even though it’s nice to converse with the people around you, you’re not sure what her day has been like. Thus, you might accidentally give off a bad impression. Smiles, laughter, and eye contact with you are all good signs that a conversation is welcome.

Think about things you like to talk about.
A conversation will go well if it focuses on something you naturally enjoy talking about—simply because you might seem happier, or more yourself, while discussing it. If you know the girl has an interest in the particular topic as well (say, maybe you know she’s into anime based on a shirt she’s wearing) then feel free to dive in. If it’s something you’re unsure about, a question like, “Are you into anime?” works, and if she says no try, “You might enjoy it! It’s my favorite thing to watch.” Just keep it short and remember to listen. It’s not a great idea to dominate a conversation, especially if it’s your first.

Don’t overthink it.
The best conversations are natural—so if you’re busy jotting down your best and funniest one-liners, you might want to abandon that list for now. Girls have a pretty good sense of when someone’s trying too hard. And while they might feel appreciative that you spent time trying to craft the perfect conversation for them, they may also get a little worried that you’re too scared to start with a standard hello. If you have to plan out the perfect opener, how awkward will that first date be?

Don’t corner her.
Keep your surroundings in mind. When you corner a girl, especially in a darker place like a bar or restaurant, even a simple, “How are you,” reads as being intimidating. Even if you’re the friendliest guy in the world who means no harm, she’s going to have her guard up if she feels closed in. Try chatting her up in a public, well-lit place with people around. And make sure to respect her personal space. You’ll have a chance to get closer if and when you two form a mutual level of comfort and trust.

Don’t immediately talk yourself up.
It comes off as being braggy if you start a conversation about your own accomplishments. The best relationships, both romantic and friendly, should have equal time to share. You shouldn’t keep your achievements in the dark, but it makes for a strange opener. Start with something simple she can actually provide an answer to.

When all else fails, talk about food.
Food is a pretty universal topic, simply because we all require it to live. It’s also something that everyone has an opinion on. If you’re new to the area and are looking to strike up a conversation with a girl, “Where’s the best place to get tacos?” is a real winner. Maybe if you’re lucky, she’ll offer to accompany you.

Sometimes, conversing with a girl can be pretty scary. Just remember, she’s a person just like you are. Think about some of the topics you love the most, and start from there. If the two of you don’t instantly hit it off, that’s quite alright. Just politely move on, and don’t let the experience scare you away from trying again. The more you talk to girls, the better and more confident you’ll get.

Karen Belz has written for sites like Bustle, PreviouslyTV, Heavy, and HelloGiggles. She’s also the founder of Best Recap Ever, a site that’s focused on television news and reviews. She’s a fan of sketch comedy shows and most movies that involve Muppets, and has been addicted to Sugar Free Red Bull since 2005.