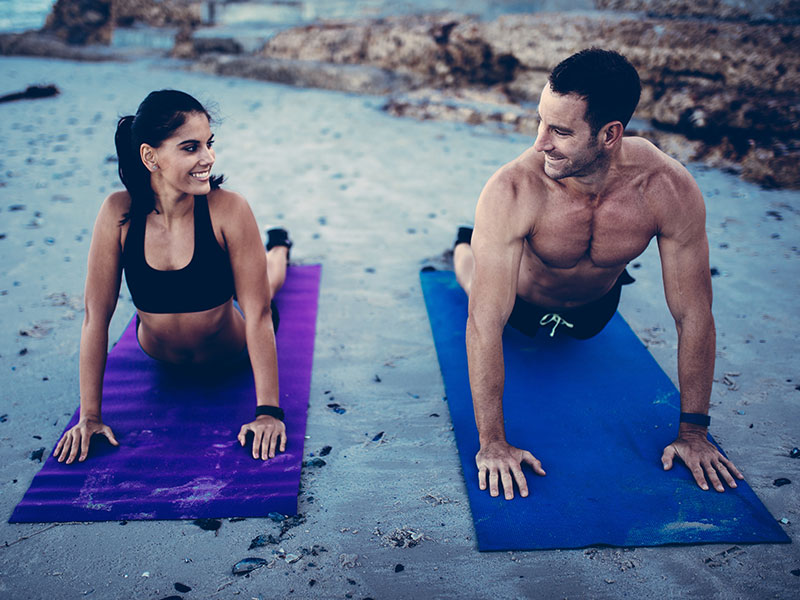 Every new year is a new beginning. People join gyms, go on diets, make resolutions to read more books, learn the guitar, volunteer more often, and promote their personal growth in a variety of ways. And, as it turns out, one of the most popular ways to promote your own personal growth is to look for love.

When it comes to New Year’s resolutions, finding love is often right up there with getting into shape or eating better. Numerous studies have shown that more people sign up for dating sites in January than any other time during the year, and it got us to thinking… What exactly is the relationship between fitness and dating? And how important is health and fitness to people who are actively looking for someone?

To find the answers, the online dating site and app Zoosk surveyed over 7,000 members and looked into data from over 1,242,696 million dating profiles to get a better idea of what singles think about health, fitness, and finding that special someone.

People are focusing on love and fitness in the new year.
38% of online daters said that their New Year’s resolution is to find love, followed by 12% who want to get in shape, and 10% who want to eat healthier or diet. Some other interesting finds…

– Unlike other age groups, Millennials are more interested in saving more money (9%) than they are in eating healthier or dieting (8%).

Regular exercise is important to the majority of singles.
65% of online daters said that dating someone who exercises regularly is important.

– Women found exercise slightly more important than men—65% of them said it was important, while only 61% of men did.

– People who exercise regularly (three times a week or more) really think dating someone who exercises is important. 83% of them said it was important while only 17% listed it as not important.

But yoga pants are really the way to man’s (or woman’s) heart.
So what workout clothes should you be wearing on all these dates? Men overwhelmingly picked yoga pants—46% of them said that they’re the most attractive piece of activewear. And women like it when guys rock yoga pants too, though basketball shorts came in a close second.

Best Fitness Terms to Mention in Your Online Dating Profile

Even talking about your own fitness and body type goes over well.
Are you really into working on your abs? Don’t be afraid to let people know! Mentioning specific words related to your body type such as lean, toned, or ripped can get you up to 27% more messages. And people who talk about their muscles get up to 122% more inbound messages than the average.

Pilates is by far the sexiest workout.
If you do pilates, you might want to bring it up in your dating profile. People who mention pilates in their profile can get up to 160% more inbound messages. In fact, workouts that require strong flexibility such as kickboxing, Zumba, and yoga will all give you a healthy increase.

Sexiest Workouts According to Online Daters

Los Angeles is the most health-conscious city.
After looking into the U.S. cities where online daters mention healthy in their profile, LA topped the charts.

Los Angeles is also the most into fitness.
Topping the charts once again, LA daters mention exercise in their dating profiles more than any other U.S. city as well.