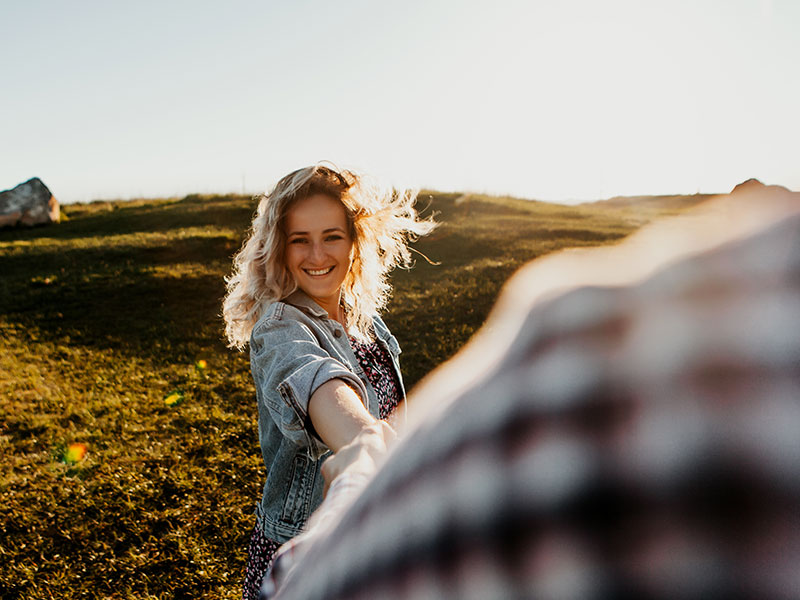 Age gaps are kind of a big deal. While you always hear success stories, a big age difference—like seven to ten years and over—come with a lot of judgment. But if it’s still a relationship you’re willing to pursue, you may need a bit of a refresher on how to start.

If you’re in your mid-to-late 20s or above, you may get a few nervous glances if you date someone between the ages of 18 to 21. That’s because even though they’re legally adults, they’re barely there yet. Just think back to your early 20s and think about how differently you handled your life and everyday responsibilities. You can’t expect a 20-year-old to be on the same page as you if you’re a decade older.

Plus, even though going out to bars isn’t everyone’s idea of a fun time, her age will limit a few options. But since everyone’s different, there’s a possibility this won’t even be an issue.

Here are some other things you should think about before asking her out.

She might not get your references.
And you may not understand hers, either. One of the best things about dating someone close to age is that you likely grew up with the same media. So her music taste may be severely different from yours, as well as her most quotable movies. The good news is, if this relationship has the potential to go the distance, you’ll have plenty of time to catch up on each other’s favorites.

You’ll be instantly red-flagged by her parents.
When you’re a parent, you always want the best for your kid—even when they’re full grown adults. So if their 25-year-old daughter expresses interest in a guy who just turned 40, they’ll be a little wary of you from the start. It doesn’t matter if you have the best intentions in the world. With a gap like that, they’ll probably assume you’re taking advantage of her, or trying to relive your 20s again through her. If you’re serious about her, you’ll try to make sure you give a great impression to her folks and address any concerns.

Her friends will also be a bit concerned.
If she has a close group of friends, things may get awkward if she invites an older guy along to hang out on a Saturday night. Again, a few years is nothing—but when it starts to become noticeable, they may get uncomfortable in your presence. If you’re 30, you want to act like a 30-year-old. You can still have fun, but you still need to remember that you’re a grown adult who’s already had these life experiences.

You’ll need to prove your stability.
The relationship will be a lot less strange if you’ve already gotten your life under control. That means, you have a steady job and plenty of hobbies outside of the relationship. You also need to be happy with yourself. Otherwise, you may go into the relationship resenting the fact that she still has a lot of time to grow and figure her own life out. As she sees you as the older man, she’ll also expect for you to have some financial stability and a life plan in regards to your career.

You’ll need to protect her from your friends.
Having a younger girlfriend can often be seen as somewhat of a prize—and that’s why you’ll need to make sure that your friends treat her with nothing but respect. Remember, she’s more than just a 22-year-old. She’s your girlfriend, who you connected with because you have a lot of the same interests. If your friends are starting to make jokes about “robbing the cradle” or make her feel uncomfortable or even unwelcome during hangouts, it’s your responsibility to stick up for her.

You’ll have to can the “you just don’t understand” talk.
You gain more life experience when you get older—that’s obviously true. But if you’re talking to your girlfriend and she has a different perspective on a situation due to lack of life experience, you can’t hold that against her. In fact, it’ll make her feel foolish if you use your own age as a basis for being right during arguments and situations. Just because you’re older doesn’t mean you’re wiser.

In fact, she’ll be resentful if you constantly bring up her age.
In her eyes, you’re with her because you like her for her. But if your jokes focus around her young age or her vastly different childhood, you’re showing a lack of respect. Even if she’s younger, you need to always see her as your equal—that’s what partnership is all about. Never use age as a way to gain control. If this happens a lot, you’ll unknowingly make her feel like a child, creating more of an emotional gap between you.

She might not know where she stands on having kids just yet.
You’ve had more time to think about this stuff, but she may not be there just yet. If you really want kids, you may unknowingly pressure her into making a decision that she’s just not ready to make yet. It’s an important topic for all couples to have, but just know it may take five to ten years for her to figure out if that’s the direction she wants her life to take.

It is possible to successfully date someone younger than you, but if it’s by a considerable amount, the experience won’t be like any of your past relationships. If she’s worth it, and you can really picture a great future with her, it’s a challenge you’ll both be naturally willing to handle together.