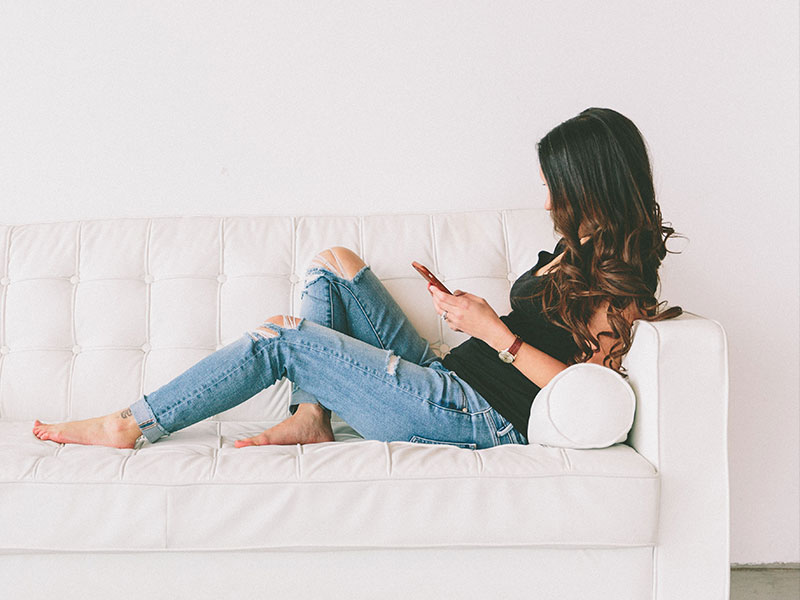 Starting a conversation with a stranger is intimidating enough in person. Put that stranger in the eight-by-three inch confines of your iPhone screen, and you’ve got Bumble. Over the last few years, Bumble has become one of the most popular dating apps with its swipe matching and lady’s first messaging model. Unfortunately, this doesn’t make starting a conversation any easier, especially when all you’ve got to go off of are a few photos and a 300 character bio.

Chatting online is a difficult artform to master, so it’s more than fine if you don’t know where to start. (Don’t worry, you’re not alone.) I wanted to share some tips on how to start a conversation on Bumble based on my own personal experience and the best openers I received during my time on the app. Consider these tips and you’ll be firing off messages like a pro.

Say more than “hey.”
My friends often complain that their matches on Bumble or Tinder only say “hey” to start a conversation. They’ll have a sea of matches and 90% of them reach out with those three letters. No punctuation in sight.

While online dating has given us access to many people we wouldn’t have met otherwise, it also means we can be choosy. So in order to get someone’s attention you need to stand out from the crowd, not blend in. Only saying “hey” doesn’t cut it anymore. Adding an exclamation point, a “how are you,” or even swapping in a “howdy” are all better… but not much. In the best case, you’ll take one of the below tips and make it your own, but, at the very least, switch up this basic greeting for something with a little more character.

Ask a question.
Questions are great for starting conversations for a few reasons. First, it shows that you’re eager to get to know someone and you put some thought in before reaching out. Second, you’re giving the other person a conversational jumping off point. Third, you’re revealing some insight into your interests and personality with the question you select.

The goals in an online dating conversation are to get a feel for each other’s personality and find common ground. You’re winning if you’re stimulating the conversation. Question openers are a great way to do just that.

Be relevant.
When you match with someone, you want to create a connection. The only information you have is what’s written in their profile, so start there. If they have a laundry list of favorite vacation spots, start by chatting about your favorite. If they have a photo where they’re snowboarding down a mountain, spark up a conversation about active sports. When you make a relevant remark, it shows that you’re being present and paying attention to the way they represented themselves. At the very least, you’re showing candid interest in them, which is always a good thing.

Be funny.
Everybody likes a good laugh, and people on Bumble happen to fall in the category of everybody. If you have a quip or joke related to something in your match’s profile, get it out there. If you can make them laugh or snicker over text, you’ve won the first battle, although it’s not always easy.

Keep it lighthearted.
Let’s talk about how to approach a conversation. It’s best to keep it light for now. You’re just getting to know them. Don’t dig super deep into family history, political beliefs, or religion very early, and don’t shut down the other person when you’re chatting because they said something you disagree with. Imagine this a conversation you might have with a friend of a friend. You want to get to know them and make them feel good, but you’re not exactly ready to air any deep dark secrets or challenge their beliefs.

Type in small bursts.
This is a good way to give your messages a sense of velocity. Text messages, especially from someone you’re attracted to, are like presents. Texting in bursts is like giving your match two or three presents each time you reach out. Also, it gives the communication a snappy playful feel… and nobody likes reading a wall of text.

Relax.
Before you send your message, take a deep breath. No matter how attractive the person is that you’re about to message, you don’t know them. Because of their semi-anonymity, dating apps have low accountability. People don’t always message back. Some people swipe right on everyone with no intention of talking. There’s a possibility that someone you’re interested in won’t message you back, so don’t fantasize about how things will end up. Take a deep breath and keep it casual.

Don’t make rejection mean anything.
Many people get start anxiety about sending a message, because they fear rejection. Remember: rejection is okay. First of all, just because they didn’t respond doesn’t mean they rejected you. Many people never respond on dating apps. Second, if they do reject you, know that this is part of the process. Everyone faces rejection sooner or later, but equating rejection to personal failure is how you lose the game.

You’re looking for something that works for you and most people (however beautiful they may be) are not that. If it doesn’t pan out, you can always move onto the next one—that’s the beauty of an app like Bumble.

Starting a conversation on Bumble can be nerve-racking, intimidating, or just downright hard, but like anything else it’s a skill. You just have to get out there and give it a shot. Things won’t always go the way you want them to, but that’s okay. Having trouble? Take a break and come back. If you’re able to take the pressure off, it can be fun. So take a breath, put your thumbs to work, and send those messages.

Alex Bocknek is the senior editor of The Date Mix and works at Zoosk, the online dating service. He’s also a recovering music critic and an aspiring fiction writer (probably lost) on the way to an independent bookstore near you. He can be found occasionally musing about politics, philosophy, and love in the modern world.