10 Signs He’s Fighting His Feelings for You 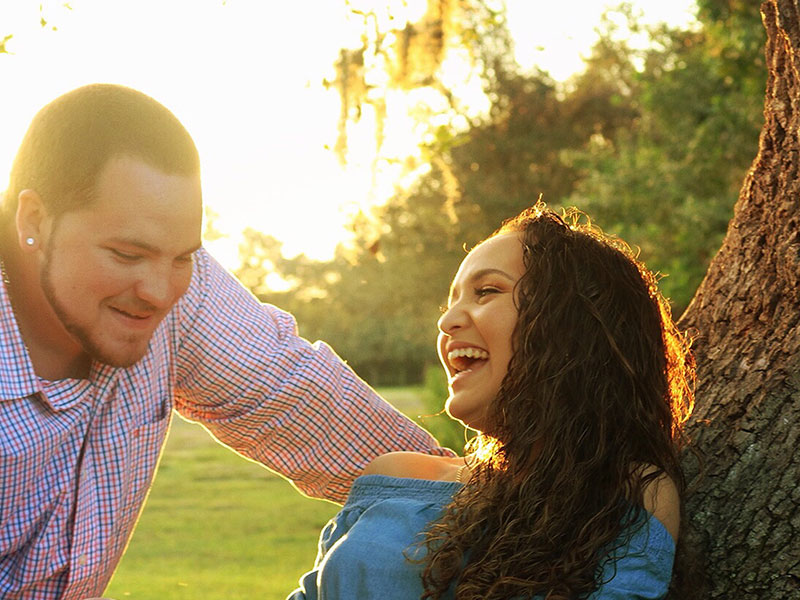 Plenty of people have crushes they shouldn’t—whether it’s a coworker who knows it’d be unprofessional to ask you out, or your best friend’s brother, who you’ve always had a secret thing for. Sometimes, moving forward with these crushes and taking a chance is worth it. Other times, it’s just too risky because there’s a lot at stake if things go terribly wrong.

If you like a guy who should probably be off-limits, here are some signs that he might be fighting his feelings for you, too.

1. He makes an excuse to talk to you every day.
It’s never anything big. Mostly he asks about how your day has been, and whether or not you’ve got plans for the weekend. He’s trying to learn a little more about you while also making sure he’s being casual. Secretly, he’s probably hoping you’ll invite him to get coffee or see a movie together. But, you’ll be the one who has to ask.

2. If you do hang out, he might bring friends along.
He’ll talk to you the entire time, but he still has friends there for backup. If he’s not interacting with them at all, it’s obvious he has a thing for you. But if someone spotted the group of you out, he can use the excuse that it wasn’t a date. Guys who are fighting feelings still want to hang out with you, but almost regret it afterward as their crush only grows stronger.

3. If he dates someone else, he downplays it in front of you.
He’s trying to move on and fight his feelings by dating someone else, but there doesn’t seem to be too much chemistry there. If you ask about her, he’s sparse with the details. And if you ask him to bring her along to a group outing, he’s quick to say she’s busy or wouldn’t be interested. Even if interacting with her wouldn’t be a challenge for you, having both of you in the same room together may be a challenge for him.

4. Other people have noticed your chemistry.
The two of you might think that you’ve fooled everyone else by keeping your flirtations under wraps, but the rest of the world can easily see you’ve got a connection. If you work together, it’s possible you’ve been compared to Jim and Pam from The Office. That might be one of the reasons why reruns of the first few seasons have really spoken to you recently.

5. He doesn’t have nice things to say about the guy you’re currently with.
He might make fun of him a little in a playful way, but he really doesn’t have anything sincere to say about him. In fact, he might have actually told you that you could do better. That’s because he knows that if he can’t be with you, you deserve someone incredible. Watching you date a guy who isn’t compatible with you is almost like a knife through his heart.

6. The two of you have a lot of private jokes together.
When you grow older, private jokes are even more cherished. It means you’re making memories together, and have a similar sense of humor. These are two incredibly important things to have in a life partner, which means that turning this flirtatious friendship into a relationship may be easier than you thought.

7. If it’s a coworker, he’s told you he’s looking for another job.
It’s not because he’s unhappy. It’s because he knows he needs to make a move to either get over you or make it less of a big deal if you decide to date. He’ll ask you for your opinion on the matter, and don’t be surprised if your words lead him to make his big decision.

8. There’ve been periods of time where he’s been a little cold towards you. Don’t take it personally, even though it’s hard to. That’s just him trying to get over you and gain better control of his feelings. Running hot and cold is a big sign that this guy is fighting an internal battle with his emotions.

9. He’s been using the “you’re like a sister to me” line more and more.
If you haven’t made any moves on him, but you’ve noticed he’s really reiterating your relationship, he’s fighting feelings. By saying this stuff out loud, he’s trying to talk himself out of liking you. He might not even realize how much he’s saying it, or how suspicious it makes him look. It’s just his mind at work, trying to reprogram the way he feels about you.

10. He constantly talks about how things “could have been.”
If this guy is an ex of a good friend of yours, that’s another reason to keep your distance. Even if the two of them only dated for a short period of time, it’s still easy to feel like you may be betraying her by asking him out. This reality isn’t lost on him. He’s probably happy if that relationship lead him towards meeting you, but sad over the fact that you two would have been a much better match. By stating that, he’s casually trying to figure out of you’d be willing to take a chance—and possibly risk a friendship.

It’s up to you as to whether or not you want to try and date a guy who’s been fighting feelings for you. It might be a match made in heaven, but it also might alienate people or jeopardize your jobs. Only the two of you can weigh the pros against the cons. Just know that if the feelings are mutual, you might always wonder what could have been if you didn’t take the chance.

Dating Tips for Men 5 Signs a Shy Girl Likes You