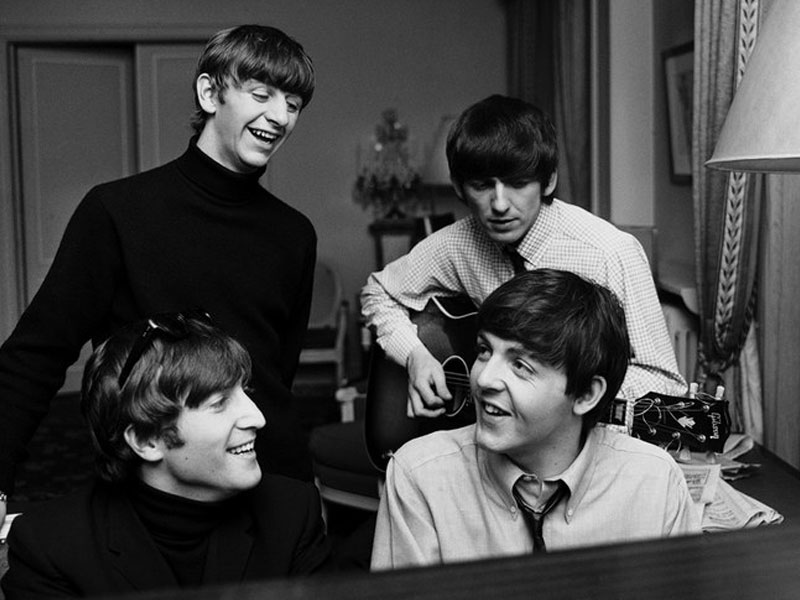 When I was very young, there was a short period of time where I thought there were eight days in a week. Like many children of baby-boomers, the music of The Beatles was something that was always on, always there, always playing in the background of my home and my life. Their music was such an everyday occurrence that it became a part of who I was in the same way my hometown, the toys I played with, or the friends I made became a part of who I was. The melodies, the songs, the lyrics, they all soaked in somehow. So much so that I learned the song “Eight Days a Week” long before I learned the actual days of the week. Imagine my confusion when I found out there were only seven. And my delight when I understood what the lyric meant. Eight days a week, is not enough to show I care…

There is a similar feeling of delight to many of The Beatles love songs. And a similar phenomenon of familiarity to them too. The Beatles were a part of many people’s lives and their melodies and lyrics soaked into many minds. When you think of young love perhaps it’s I want to hold your haaaAAAaaaaaaAAAAnd that runs through your mind, when you meet someone new who you’re inexplicably excited about it maybe it’s I’ve just seen a face, I can’t forget the time or place that pops up, or when you look at the woman you love walking across a room something in the way she moves is what draws you to her side.

Lennon and McCartney, Harrison, and yes, even Ringo too, are undeniably some of the greatest song-writers of our time. They wrote extensively about many things but their songs about love cover all sides of the spectrum. From the simple moments to the complex relationships, to shades of grey and feeling blue—the Beatle’s love songs are some of the finest.

It’s thought by many that the inspiration for “Eight Days a Week” came from a “Ringoism”—a term The Beatles made up themselves to describe the slight turns of phrase Ringo Star would sometimes make. (Others include “A Hard Day’s Night” or “Tomorrow Never Knows”.) Paul McCartney found these phrases wonderful and lyrical and often worked them into the songs he wrote. The exact origins of “Eight Days a Week” are somewhat under debate however—there are some that credit a Beatles’ chauffeur with coining the phrase, and not Ringo.

No matter where the lyric came from, the song became a number-one hit and one of the more light-hearted love songs in the band’s repertoire.

Perhaps it’s the dreamy nature of the ballad, the slow easiness of it, or the surprising comfort the word “And” brings to the lyric “And I love her” but there’s something undeniably sweet about this popular Beatles’ song.

“The ‘And’ in the title was an important thing,” explained McCartney in an interview about its creation. “And I Love Her,’ it came right out of left field, you were right up to speed the minute you heard it. This was almost an aside, ‘Oh… and I love you.”

3. Here, There, and Everywhere

To lead a better life
I need my love to be here
Here, making each day of the year
Changing my life with a wave of her hand
Nobody can deny that there’s something there

Considered by many to be Paul McCartney’s best love song (and his own personal favorite), “Here, There, and Everywhere” is about how being with the person you love makes you a better person while also giving you a better life. A lovely thought for a lovely song.

Fans of James Taylor may recognize opening lines of “Something” since they came from his well-known song, “Something in the Way She Moves”. George Harrison, who wrote the song, was inspired by Taylor’s lyric and used it as a jumping off point. Who inspired the song, however, is a little less sure. Many believe it was Harrison’s then-wife Pattie Boyd (including Boyd herself who once said, “He told me, in a matter-of-fact way, that he had written it for me. I thought it was beautiful.”) but Harrison later claimed in was Ray Charles and his voice who inspired the song.

“When I wrote it, in my mind I heard Ray Charles singing it, and he did do it some years later,” Harrison explained.

5. The Long and Winding Road

Another song written with Ray Charles in mind (McCartney said his persona and style inspired the tone), “The Long and Winding Road” isn’t a love song in the usual sense. It’s actually about The Beatles’ fraught relationship as a band, and was written at a time when things were starting to get really rocky.

“I was a bit flipped out and tripped out at that time,” McCartney explained in a later interview. “It’s a sad song because it’s all about the unattainable; the door you never quite reach. This is the road that you never get to the end of.”

I’ve just seen a face
I can’t forget the time and place,
where we just met
She’s just the girl for me
And I want all the world to see
we’ve met

If you’ve ever met someone you were instantly excited about, “I’ve Just Seen a Face” may be the song for you. The uptempo beat that McCartney described as “slightly country and western,” propels the song forward and mimics the excited, anything-can-happen feeling of meeting someone amazing for the first time.

“The lyric works: it keeps dragging you forward, it keeps pulling you to the next line,” McCartney described. “There’s an insistent quality to it.”

Inspired by the Motown sound, “There’s a Place” was co-written by Lennon and McCartney and thought by some to be based loosely on the song “Somewhere” from West Side Story. Like a lot of Lennon’s work, it stressed the idea of going to a place in your mind, rather than the outside world, to find peace and contentment.

“In our case the place was in the mind, rather than round the back of the stairs for a kiss and a cuddle,” explained McCartney in a later interview. “We were getting a bit more cerebral.”

“If I Fell” is a song for anyone who’s been hurt before and is weary about jumping into love again. But it also has a biting last lyric, “So I hope you see that I/ Would love to love you/ And that she will cry/ When she learns we are two.” Perhaps, it’s a bit harsh wishing for your ex-lover to cry, but who hasn’t felt that way before… at least just a little.

“It’s semi-autobiographical, but not consciously,” said Lennon, when describing how he wrote the song. “It shows that I wrote sentimental love ballads, silly love songs, way back when.”

“People tend to think of him as an acerbic wit and aggressive and abrasive,” said McCartney, speaking of Lennon. “But he did have a very warm side to him really, which he didn’t like to show too much in case he got rejected.”

“All My Loving” is the only song McCartney ever wrote where he started with the lyrics, then created the accompaniment. Written on the road while the band was on tour with Roy Orbison, it almost seems like a dream of a song… It’s exactly what you wish someone would tell you before they go away. (But what they rarely, if ever, do.)

Treasure these few words till we’re together
Keep all my love forever
P.S. I love you

Perhaps the perfect followup to “All My Loving”, McCartney used the idea of a love letter to inspire “P.S. I Love You” as well.

“It’s just an idea for a song really, a theme song based on a letter, like the ‘Paperback Writer’ idea,” he explained later. “There are certain themes that are easier than others to hang a song on, and a letter is one of them.”

Big and black the clouds may be, time will pass away
If you put your trust in me, I’ll make bright your day
Look into these eyes now, tell me what you see
Don’t you realize now, what you see is me

Though it’s known as a romantic love ballad, some think the themes of love, consistency, and comfort in “Tell Me What You See” may have been partly inspired by religious sentiments. Select lines from the song are almost exactly the same as a religious motto that hung on the wall of Lennon’s childhood home: “However black the clouds may be/ In time they’ll pass away/ Have faith and trust and you will see/ God’s light make bright your day.”

Ah, ah, you’ve been good to me
You made me glad when I was blue
And eternally I’ll always be in love with you
And all I gotta do is thank you girl

If you’re deeply in love with The Beatles, then this song is written just for you. Really. “Thank You Girl” was meant to be a song for fans, thanking them for their love and support.

“We knew that if we wrote a song called ‘Thank You Girl’ that a lot of the girls who wrote us fan letters would take it as a genuine thank you,” explained McCartney. “A lot of our songs were directly addressed to the fans.”

Someday when we’re dreaming
Deep in love, not a lot to say
Then we will remember
The things we said today

Written about McCartney’s then-girlfriend Jane Asher, “Things We Said Today” has a tone that’s oddly melancholy and almost eerie. As if it foretells the end of a relationship (or perhaps just the end of the current, fleeting moment) even while they’re in the middle of it.

“It was a slightly nostalgic thing already, a future nostalgia,” explained McCartney. “We’ll remember the things we said today, sometime in the future, so the song projects itself into the future and then is nostalgic about the moment we’re living in now.”

Oh, and this boy would be happy
Just to love you, but oh my
That boy won’t be happy
Till he’s seen you cry

“This Boy” came about because Lennon and McCartney wanted to write a song with a three-piece harmony, and they didn’t focus much on the lyrics or meaning. But perhaps that’s why it works so well.

“The slow, sad song about ‘This Boy’ is expressively unusual for its lugubrious music, but harmonically it is one of their most intriguing, with its chains of pandiatonic clusters,” explained William Mann, a music critic for The Times. “And the sentiment is acceptable because it’s voiced cleanly and crisply.”

The music for “I Will” came together easily but the lyrics behind this soft ballad took longer to get just right. At first McCartney and others were kicking around ideas about the moon, but McCartney felt “the melody was better than the words.”

“I kept searching for better words and I wrote my own set in the end,” he explained. “Very simple words, straight love-song words really.”

We’re glad he didn’t give up.

In “Real Love” the answer to loneliness and a feeling of disconnect and unreality (that Lennon may have been feeling before meeting Yoko Ono) is love. Many who have been in a relationship can relate to the idea that love grounds you somehow and puts you in touch with yourself in the world. And the song , that was part of The Beatles’ Anthology project, became the last Beatle’s song to become a top 40 hit in the U.S.

A lot of the information about how these great songs came to be came from The Beatles Bible. Check them out to learn even more about the band and its music.